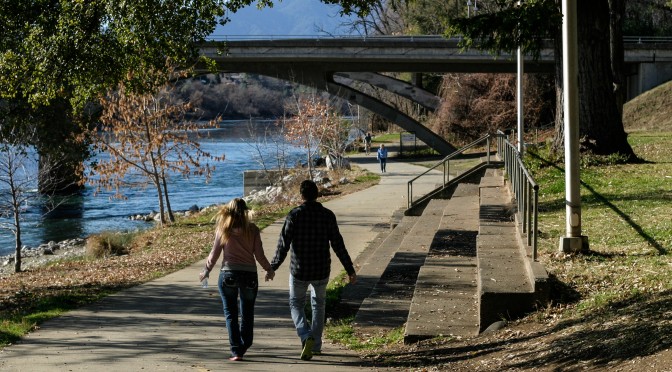 Rails to Trails Conservancy is featuring the trails of California this September with articles and posts about activities across the state.  Redding trails make the Top 10 list – and are the subject of the featured article!  Check out the articles and share them with your friends:

Sacramento River Trail was chosen as one of the top ten trails across our great state!

A Thousand Wonders – Plus More!

You’ve read about it in Rails to Trails magazine, now get the full story about the Sacramento River Trail system in the extended story with additional details and travel facts!

This article on the wonderful systems of trails in Redding first appeared in the Fall 2013 edition of Rails to Trails magazine. Due to space restraints, Bryan Goebel’s original piece was edited down quite a bit for the print product.

Rails to Trails Conservancy has made the full article available online, with many additional travel facts and descriptions of the Sacramento River Trails. 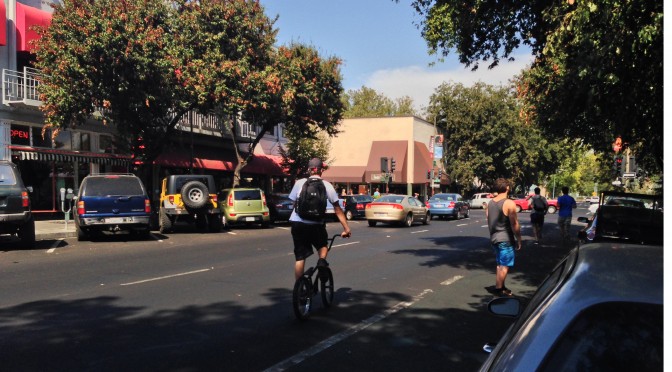 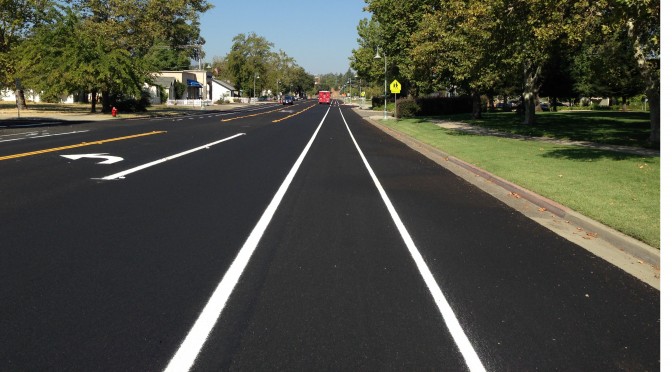 Some of you may have noticed there’s been a lot of roadwork going on Parkview Avenue, just south of the Redding Civic Center.  The City of Redding has resurfaced the street with a nice, fresh overlay and taken the opportunity to put Parkview Avenue on what’s commonly known as a “road diet.”

The term road diet can be misleading, conjuring images of sacrifice, frustration, and scarcity. We prefer the term “rightsizing.” The goal is to reallocate resources in a more useful way that reflects the current needs of the community and to make streets more livable for everyone.

Rightsizing is typically applied to streets with excess capacity, most commonly two-way streets with two lanes in each direction. Rightsizing usually reconfigures the street to one lane in either direction, and the freed-up space is then used to improve the street’s facilities.

The city has also added bulb-outs at several intersections. Bulb-outs are features where the sidewalk is extended into the street at corners, making a bulblike shape. Bulb-outs make streets much more pedestrian friendly because they shorten the distance to cross from sidewalk to sidewalk—which is great for families with small children, the elderly, and the differently abled. Bulb-outs also encourage cars to slow down in order to safely navigate the turn onto the cross street.

Benefits of a Rightsizing a Street

Numerous rigorous studies show that rightsizing significantly decreases the number of accidents on a street and does not affect the volume of traffic a street can handle. Rightsized streets have been successfully implemented in numerous cities such as Seattle, San Francisco, and Palo Alto.

Why Parkview Has Been Rightsized

Rightsizing is endorsed by the Federal Highway Administration as a proven safety countermeasure that benefits motorists, pedestrians, and cyclists.

A 2007 City of Redding speed study (the most current posted to the City of Redding website) indicates Parkview Avenue carries an average daily traffic of 4,600 vehicles. The FHA notes that “it has been shown that roads with 15,000 ADT or less had very good results in the areas of safety, operations, and livability [when rightsizing has been applied.]”

Furthermore, The 2000-2020 City of Redding General Plan designated Parkview as a focus area and called for the city to “establish public open-space and pedestrian/bicycle links between the river and parks, activity centers, schools, and other major open-space areas such as stream corridors” and to “provide for a pattern of development that encourages walking, bicycling, and transit use.” Parkview Avenue was also named as proposed Class II bikeway facility in the transportation element of the general plan.

The residents of Parkview are thrilled with the rightsizing. In a recent email to our organization, Heather Phillips, president of Parkview Neighborhood
Association, writes, “I am so thrilled with the Parkview Avenue project currently underway… and I want to assure everyone that it is noticed and LOVED and welcomed.”

There are still some areas for improvement and issues brought up by local residents that have not yet been addressed. For example, there is a section of sidewalk that was not completed and crucial improvements are still needed to help people walk and bicycle safely cross the A.C.I.D. canal. We encourage the city to address these as soon as is possible so that Parkview Avenue can truly be considered a complete street.

That said, the improvements that have been made terrific. It’s great to see the City of Redding focus on Redding’s core and impressive to see how far Parkview Avenue has come in the past decade! 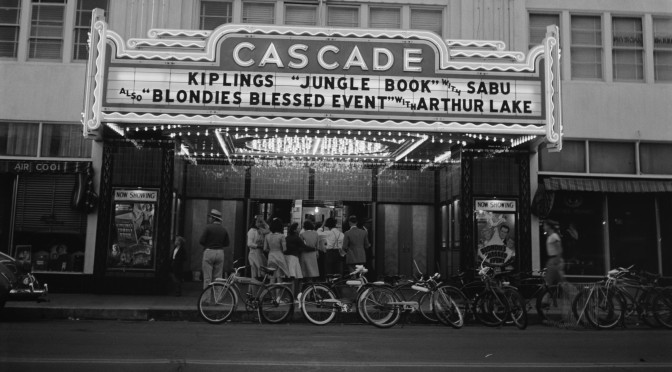 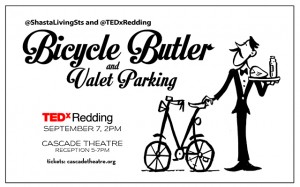 Ride downtown on a warm Saturday afternoon for inspiration and conversation and to remember just how lucky we are to live in such a great place.

Our butlers will be available to assist you and watch your bicycle as you enjoy the program in the beautiful Cascade Theatre.

For more information about the program put on by the Catalyst Group:   tedxredding.com

We are very happy to announce Keith Williams has been chosen to serve on the statewide California Bicycle Advisory Committee, representing Shasta Living Streets and the issues and opportunities of our region.  Dave Snyder, Executive Director of the California Bicycle Coalition says “Keith plays an important role on the committee and has already had an impact in helping achieve a victory in the recent meeting clarifying standards for bicycle facility design.”

The committee serves to inform Caltrans on state-wide policy, infrastructure standards and implementation, providing input on bicycle facility design issues.  Keith has an academic background in transportation planning, and an understanding of on-the-ground bicycle experience, issues and advocacy from Central California and now from his home and work in the North State.  Keith lives in Redding and currently works at Shasta Regional Transportation Agency as a part-time Transportation Planner.

While the cities and counties of the North State are not the most populous areas in the state, we represent the “other” California, outside of metropolitan-urban areas – with perspectives and issues that are important to include in order to get buy-in and to design comprehensive solutions to drive improvements across the state.

People living in cities and counties like ours are especially dependent on statewide transportation direction, policies and programs.  And the need is great – for example, current context and road conditions across the North State mean that despite strong interest from local families – very few children can walk or bicycle to school or to a friendʼs house or the local business district.  Few of these children have transit options, and we have a high rate of death and injury when people walk and bicycle despite dangers.  It is ironic that in this more rural place children and families generally have less opportunity to walk and bicycle than in metropolitan areas.   We want to share the perspective and need from these types of communities, and help to identify solutions and approaches that work broadly across California.

Shasta Living Streets is very interested in advancing the work of this advisory committee.  We congratulate Keith and look forward to supporting him in this role. 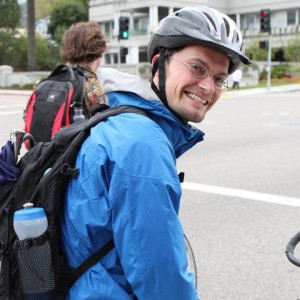 “If your city doesn’t have a protected bike lane yet, it’s being left behind”

“The protected bike lane can make a huge difference, in particular for the average person who maybe doesn’t ride every day,” Klein said. “It will make them feel like ‘I can get on a bike too,’ or ‘I wouldn’t mind if my child rode a bike to school.’”

Impact of a protected bike lane in New York:

Learn more at MomentumMag.com, by Angie Schmitt:  The Rise of The North American Protected Bike 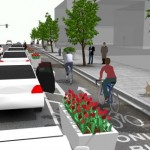 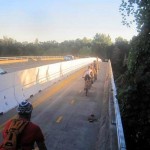 We talk about the inexpensive methods of making our streets better serve people and business and making them safer for people to walk and bicycle in their everyday lives.

Click on the links below and let google images give you a quick visual tour of the possibilities. 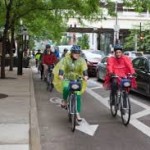 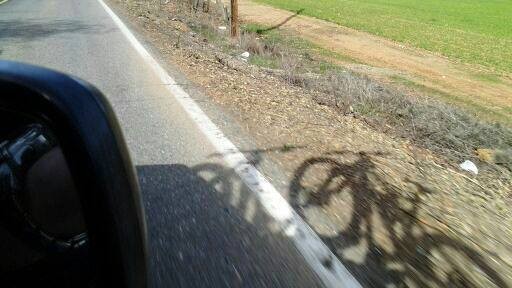 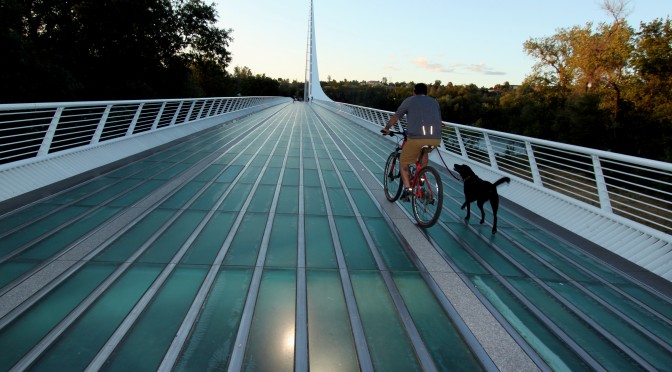 Redding trails and walking, bicycling and travel opportunities are featured in the current issue of Rails to Trails Magazine.

The wonderful article describes an amazing collaborative effort of groups and individuals across the community to create this valuable local resource.  And it providesan account of how use of the trails is driving increased demand for better bikeways and pedestrian access for getting around on the streets in our cities.

Download the article here:  The Road to a Thousand Wonders

Get ready everybody – this article will reach thousands of people nationally who are interested in great new trails to visit and places to move to that support active living.

The word is getting out! ~

The theme is western and fun!   Wear your ten gallon hat and ride your zero gallon bike!  Extroverts welcome.  We ride too!

Join friends from Shasta Living Streets and The Shasta Wheelman as we ride in the parade to help our community understand that We Ride Too.  Help spread the word about bicycle safety and enjoy the beautiful day and riding in the parade – it’s really fun!

Saturday, May 18th.  Meet on the corner of California and Trinity Streets at 8:30 am. 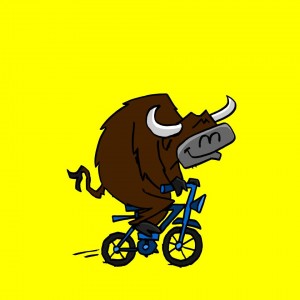 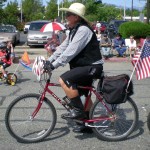