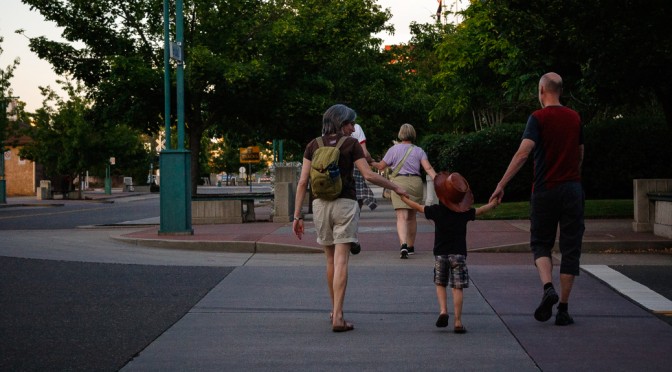 Before you start to say it can never happen here, it’s already begun.

{Part One of a Series On Jeff Speck’s Walkable City: How Downtown Can Save America One Step At A Time, originally published on A News Cafe.]

Shasta Living Streets sometimes gets described as a bicycling group. While we advocate cycling, it’s just a portion of our platform.  Our full platform can be found in our name—living streets.  Streets that are lively and accessible to everyone in our community: bicyclists, pedestrians, young, old, abled, differently abled, and yes, motorists too. The City of Redding has been attempting to revitalize downtown for fifty years now, to various degrees of success. In Walkable City: How Downtown Can Save America, One Step At A Time, author and city planner Jeff Speck posits the key to making a vibrant city is walkability.  His book, clocking in at a breezy 312 pages, is an engaging and easy read that encapsulates the Shasta Living Streets agenda as well as anything we’ve seen.  We urge you to buy it, read it, share it with your friends, and join us to discuss it. In Walkable City, Speck argues walkability is more than just pedestrian safety. “If walking was just about creating safe pedestrian zones,” Speck asks, “then why did more than 150 Main Streets pedestrianized in the sixties and seventies fail almost immediately?” (Sound familiar?)  Speck puts forth what he calls the General Theory of Walkability, which asserts that a walkable city, town, or district must meet four criteria to be considered truly walkable: useful, safe, comfortable, and interesting:

“Useful means that most aspects of daily life (work, school, groceries, etc.) are located close at hand and organized in a way that walking serves them well.  Safe means that the street has been designed to give pedestrians a fighting chance against being hit by automobiles; they must not only be safe but feel safe, which is even tougher to satisfy.  Comfortable means that buildings and landscape shape urban streets into “outdoor living rooms,” in contract to wide-open spaces, which usually fail to attract pedestrians.  Interesting means that sidewalks are lined by unique buildings with friendly faces and that signs of humanity abound.”

So why should our cities and towns be walkable?

Speck observes, “surveys show creative-class citizens, especially millennials, favor communities with street life.”  While Boomers and Gen-Xers grew up on TV portraying cities as dangerous dens of crime and the suburbs as pastoral ideals, millennials grew up on shows portraying cities as exciting and benevolent places full of life.  This preference for urban living is becoming dominant and is expected to last for decades.

As they age, Baby Boomers (25% of the U.S. population) are downsizing their large, isolated, suburban empty nests and seeking more compact neighborhoods where they can walk instead of drive as part of their daily lives.  It makes sense; how many of us know an elder who has had to give up driving?  What happens when they are stuck in their suburban home miles from stores and services? How alienating must that be?

Between the millennials and boomers (the two largest demographic groups in America), the demand for walkable urban living has the potential be a large economic windfall;  Christopher Leinberger of the Brookings Institute theorizes it will take 20 to 30 years to meet the pent-up demand.  Will they want to live in Redding or will they want to live somewhere else?

In cities from New York to Seattle to Detroit, housing in walkable urban areas fetches a 40-200% premium over comparable housing in suburban neighborhoods.  The same principle can be found at work with commercial properties—during the recession, suburban office vacancies increased while downtown vacancies stayed put.

Living a walkable life means less spending on cars and more disposable income for local businesses.  Studies have shown that the average American family now spends more on transportation than housing—“about $14,000 per family per year driving multiple cars,” according to Speck, and “almost 85% of money spent on gas and cars leaves the local economy.”  If we made Redding walkable enough that only 1% of our families decided to go car-free, that could mean over 12 million dollars a year would be freed up for more discretionary—and local—spending.

By now, everybody should know by now we are in the midst of an obesity epidemic that is making a tremendous negative impact on medical expenditures, lifespans, and the quality of life.  Many studies are beginning to link this epidemic “directly to the automotive lifestyle.”

According to Speck, “one effort found for every additional five minutes Atlanta-area residents drove a day, they were 3% more likely to be obese.”  The automobile also impacts public health through pollution, car crashes, and even higher blood pressure caused by sitting in traffic.

It Can Happen Here

Before you start to say it can never happen here, it’s already begun. More and more young professionals are moving downtown, citing its proximity to activities, events, businesses, and the river trail as its best features.  Christine Stokes, Executive Director of the Shasta Historical Society, moved downtown to be closer to work and friends and quickly fell in love with the architecture and greenery.  “I love being able to sit outside at a local restaurant for dinner and then take a stroll home,” says Stokes.

“I see so much more when not driving through; businesses I didn’t know existed, places I’ve never visited, in a town in which I was born and raised.”

Brandi Greene of E2 Consultant Engineers and Catalyst bought a house downtown to make a daily impact in an area she would like to see evolve.  “I have enjoyed the look on other’s faces when I say I walked,” she smiles. “I see so much more when not driving through; businesses I didn’t know existed, places I’ve never visited, in a town in which I was born and raised.”

Both Greene and Stokes still see a need for changes downtown—we’ll discuss these changes in a future article—but it’s becoming clear that with a little work, we can turn this kind of interest and commitment into a thriving downtown for everyone.