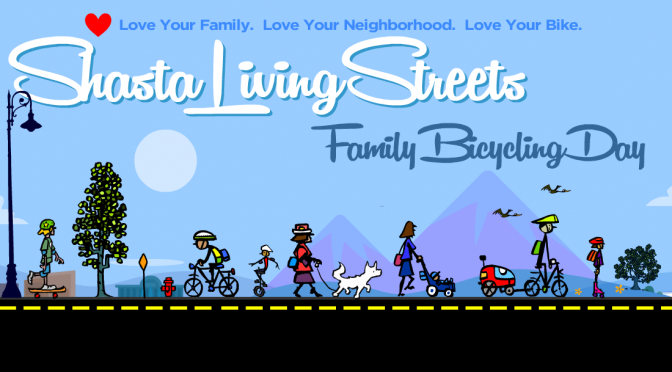 People traffic replaces car traffic, and the streets become ‘paved parks’ where people of all ages, abilities, and social, economic, or ethnic backgrounds can come out and improve their mental, physical, and emotional health.
– Gil Peñalosa, Executive Director of 8-80 Cities

Safe streets for people to enjoy

2011 was the year of Redding’s first ciclovia.   On the eve of that event, organizers received a congratulatory email message from renowned open streets advocate Gil Peñalosa, who championed car-free Sundays as former parks commissioner in Bogota, Colombia, where the ciclovia movement began in the 1970s.

“Tactical Urbanism” is a recent buzzword to describe the types of participatory projects that are designed for short-term tests of new ideas in cities.

Shasta Living Streets manages short-term projects to give residents, businesses, community-based organizations, and city leaders a chance to work together and test out and try new ideas – to experience new types of city amenities and see how they fit in our community.   These projects allow people to experience the vision of a new idea, and to gather input from people about what they like, as well as ideas for adjustments.

What others are saying

Redding was one of the first in the nation.   At the start, Redding’s cyclovia was the first in California outside of the metro Bay Area & Los Angeles ~  We are included in this overview of the 80 open streets initiatives across the country, with examples and best practices.  Download the report.