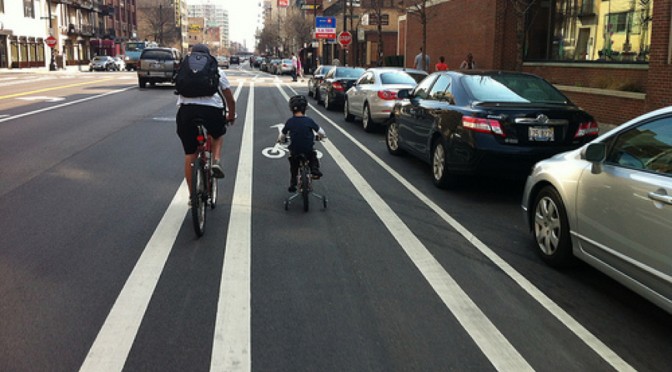 An article (subscription required) in Saturday’s Record-Searchlight makes it clear that there is still discussion about whether 2 lanes for auto traffic with the addition of a Better Bikeway would better serve downtown businesses and local families than the current configuration of three lanes for auto traffic only.

As Caltrans talks bikes lanes in downtown Redding, push to reduce lanes on California St. emerges. … “discussion on Wednesday is shaping up to be over whether the less-congested California Street should be reduced from three lanes to two.”   Your voice is necessary to make a difference.  Please send your input—it’s easy!  Here’s why we feel these improvements are so essential:

This is exactly the kind of real change that will boost the viability of downtown by helping make downtown Redding a place people want to be.

HOW YOU CAN HELP

We need you to email the Caltrans District 2 Public Information Office at d2pio@dot.ca.gov RIGHT NOW and tell them you support rightsizing California Street to two lanes and adding a buffered bikeway.  Get your friends and family to email as well!  We don’t have much time, Caltrans will be making their decision this Wednesday, May 28.  Make no mistake –  this improvement will not happen without strong public support.

Caltrans and the City of Redding have been tremendous supporters of our cause and have been eager to listen to our suggestions; that’s why it’s absolutely critical that we show there is a demand for this kind of quality downtown boulevard and bicycling facility in Redding.

Here’s a suggestion for what you can say:

“I support rightsizing of California Street with two lanes for auto traffic and a Better Bikeway on California Street.  I think this is a good idea for downtown business and local families because [choose any of the benefits outlined above and add your own].  I am a [business owner, parent, professional ….] and I thank Caltrans and the City of Redding for your willingness to make these improvements in the near team to support the health and vitality of downtown Redding which will benefit local businesses, families and our regional economy.”

This is our chance to make a huge difference in the walkability and bikeability of downtown Redding in the near term.  We need your help!

Caltrans will be making a pavement overlay on California Street in downtown Redding this summer as part of $3 million dollar project.  There is potential to rightsize California Street to two lanes and add a Better Bikeway with buffers along the bike lane—providing safer movement for all users of the roadway.

Why should we rightsize the lanes on California Street?

Road diets result in safer streets for motorists, pedestrians, and cyclists. Researchers have found that road diets can be expected to reduce overall crash frequency by anywhere from 19% to 43%, with the higher crash reductions occurring in small urban areas than in metropolitan areas. A recent rightsizing of a one-way NYC street from three lanes to two resulted in a reduction of the percentage of vehicles on the street breaking the speed limit from 74% to 20% and the percentage of cyclists riding on the sidewalk decreased from 46% to 3%.

If California Street were rightsized, pedestrians would have one less lane of motor traffic to cross, motorists would be less prone to switch from lane to lane erratically, and there would be more room for cyclists.

The difference a road diet will make in the street life of California Street is incalculable. Peak traffic might exist for 30 minutes a day for 5 days a week or less, but people move on these streets for 24 hours a day, 7 days a week.

No. The FHA has determined that road diets do not cause congestion on roads that carry under 20,000 ADTS (Average Daily Trips). California Street carried an estimated 9,200 ADTS in 2012.  That’s maybe 1/3 more than Parkview Avenue carried that year.  Parkview Avenue recently rightsized to 1 lane in each direction—noticed any congestion on Parkview lately? Neither have we.

In discussing road diets, the FHA states:   “It has been shown that roads with 15,000 ADT or less had very good results in the areas of safety, operations, and livability.”

Shouldn’t we just leave the streets alone? They’ve been fine like this for a long time.

No, they haven’t been fine.

The streets are currently designed to move the maximum amount of traffic through downtown at a high amount of speed.  This makes downtown more unpleasant and uncomfortable for pedestrians and bicyclists, and is bad for business.

The current general plan, in place for many years, makes clear that this type of goal has drawbacks for local business and calls for changes like the one now being discussed: “moving traffic through Downtown without delay detracts from efforts to establish an active, pedestrian-friendly area” and the plan allows for “‘tolerable delays’ for the Downtown area where vitality, activity, and pedestrian and transit use are primary goals.” The plan has a stated policy to “restrict speed limits in residential neighborhoods, Downtown, and other areas of the City where pedestrian activities are strongly encouraged to reduce the potential for pedestrian injuries and fatalities.”

If we rightsized California Street, what would we do with all that space?

Glad you asked! We’re like to see a buffered bikeway! After all, the City of Redding 2000-2020 General Plan has a stated goal of making it easier and safer for people to travel by bicycle, to be effected by “incorporat[ing] facilities suitable for bicycle use in the design of interchanges, intersections, and other street-improvement/maintenance projects. ”  This type of Better Bikeway can easily be implemented within the limited scope of the current overlay project.

NACTO (National Association of City Transportation Officials) defines a buffered bikeway as “conventional bicycle lanes paired with a designated buffer space separating the bicycle lane from the adjacent motor vehicle travel lane and/or parking lane.” Simply put, it’s a normal bike lane with a little extra space just like the image at the top of this post.

Is a buffered bikeway on California Street a good idea?

It’s good for everyone:

If you build it, people will ride:

Citations for these and many more statistics can be found at People for Bikes’ website.

Why should my tax money be used on a bicycle lane?

Is this an ambitious enough proposal?

This is just an overlay project and has a very limited budget and scope. A buffered bikeway can be put into place with just a few gallons of paint. Any more significant changes to downtown circulation would be more expensive and would have to wait for a future project. In this case, the perfect is the enemy of the good and we should applaud Caltrans and the City of Redding for attempting to do more with less!