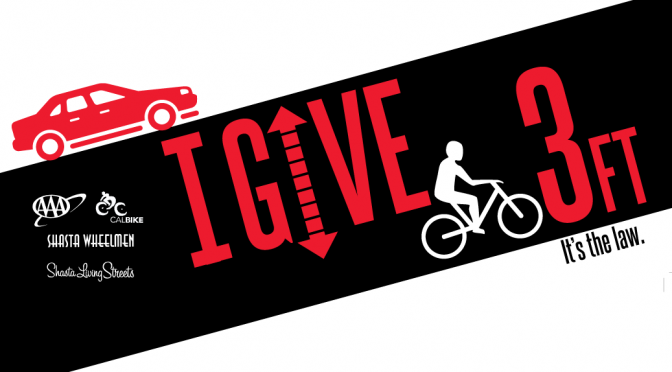 Why is this a Big Deal?

Bicycling is good for our community, for families and businesses.  This is just one of the steps to make it easy for people to choose a bicycle for some of their daily trips.  Bicycling is fun, economical and healthy, and this law helps remind all drivers to think about passing safely.

“The CHP says there’s really no excuse for breaking the upcoming three foot rule.  “If you can’t give them three feet, slow down, reduce your speed and only pass when it’s safe to do so”,  CHP Officer Edgar Figueroa said.    http://abc7.com/news/ca-law-requires-3-feet-buffer-between-drivers-bicyclists/292322/

When drivers give bicyclists more space as they pass, a leading cause of deadly collisions is minimized and more people feel comfortable about choosing to ride their bikes, which in turn promotes a more livable and economically viable community for us all.

The law now requires motorists to give at least three feet of clearance when passing a bike in the same lane.  If not enough space is available, the motorist must slow down and pass when no danger is present to the bicyclist.  This is one step in a comprehensive set of actions local communities and the state are taking to make bicycling safe for people of all abilities.

A person traveling by bicycle on a street is vulnerable.   Similarly, road construction crews are vulnerable.   As are pedestrians – nearly 4,300 people died when hit by cars in 2010, according to National Highway Traffic Safety Administration data.

Slow down and think about passing safely

What you can do:  Pass people on bicycles safely when you drive, giving at least a three foot buffer zone between your car and a person on a bicycle.  Tap your brakes, slow down, and think about passing safely.

Help your friends and family understand that by doing so they help prevent crashes that kill more adult bicyclists than any other cause in California and the US.

A car obviously weighs several thousand pounds and a pedestrian or bicyclist, as a result, will lose in any collision.

What if you can’t give three feet?

Driver and bicyclist illustrating how far 3’ is with a measuring tape.   Watch video – click here

More information and links at the bottom of this page.