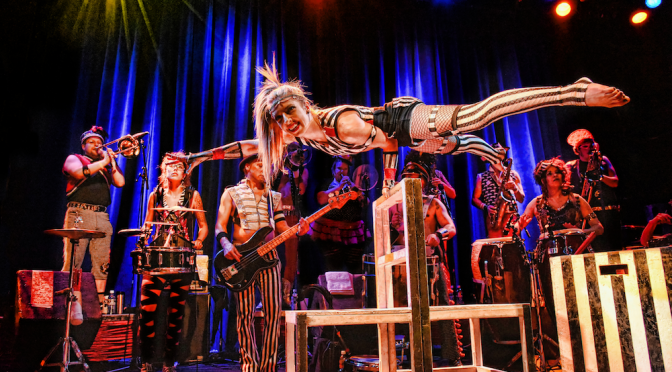 MarchFourth returns to Redding for a Downtown Fall Festival!

MarchFourth is a joy-inducing force of entertainment. The colorful explosion of brassy funk, rock, and jazz is all about the groove. This larger-than-life group of musicians and acrobats tours the country year-round, bringing a spirit of celebration wherever they go. MarchFourth is, in a word, FUN!  This is a big-band show not to be missed.  Join us!

“From the first note to the last, the sound was pumping and the fun never stopped… It’s worth noting that there are serious musicians behind all the fun. It’s obvious these guys (and gals) have had lots of training and formal practice. Talented band geeks turned rebels.”   ~ USAToday

Special Guest: Major 7th
Major 7th was formed three years ago by members of the Shasta High School Jazz Band. This summer they have been featured in a number of local festivals. Members of Major 7th are big fans of MarchFourth. They also have a female sax player in Emily Stolz. Members are: Jacob Akana, Emily Stolz, Rob Trent, Daniel Lindberg.

We invite you to dress-up in your carnival, halloween, fall-festival finest!  It’s October, it’s beautiful in Downtown Redding, and this is a new way to get together with friends and family and have a great time.