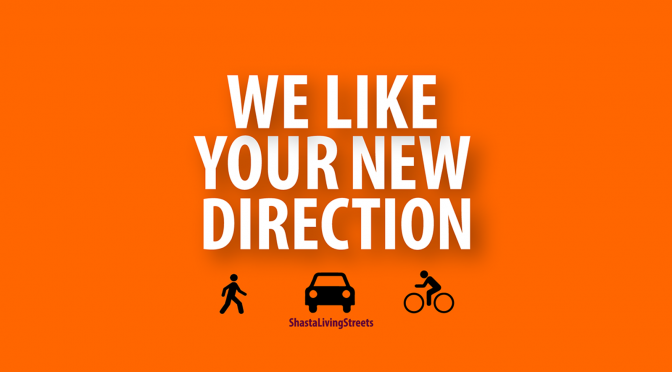 Caltrans announces a new people and community-friendly direction that will help transform communities across California – and Downtown Redding is the Feature Story!

We have set course on a new mission, established a new vision and adopted new goals to ensure that California has a transportation system that meets the complex needs of the coming century.   – Caltrans Director, Malcolm Dougherty This new direction was announced in Caltrans Performance Report, June 2015.

We are excited to see the feature article in this important publication – Redding, California:  New Road Diet Improves Downtown Business!

Thank You and congratulations to our many members and supporters who made this project possible in the first place.  Your letters and phone calls supporting this project made the difference. Kudos to staff and leadership at Caltrans District 2 and staff of the City of Redding  for the vision, design and planning to implement the California Street project quickly for the benefit of downtown businesses and local people who want to see a more inviting and safe downtown district.

We look forward to further improvements on California Street and downtown Redding for walking, biking, public spaces, parking and driving – though the current planning processes and future project implementations.