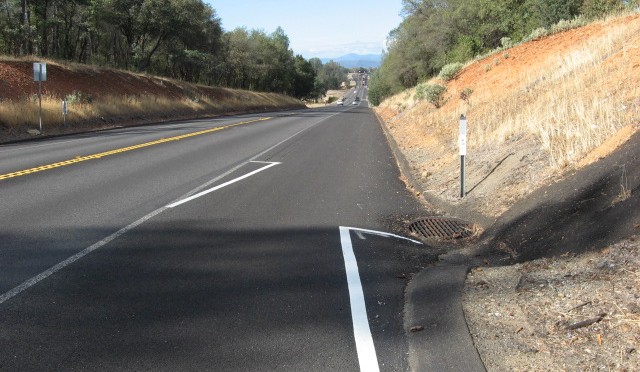 We are very pleased to have partnered with Caltrans for the innovative new hazard-alert markings, to help cyclists ride safely along highway shoulders – the Flying Wedge!  Allen Kost, Anne Thomas worked together with Caltrans over a couple of years to make this happen.  Keith Williams (Caltrans Bicycle Advisory Board Member, SRTA) also assisted.

Many people ride roads like this between their homes, businesses, and daily errands because there is often no other option.    Shasta Living Streets and our volunteers have been collaborating with Caltrans for nearly three years to make travel safer for people on bicycles, by alerting cyclists to rumble markings in the roadway. Impossible to see the road hazards Allen Kost has been riding in Redding and Shasta County for many years.  He provided valuable input on this project for a number of years, and has this to say:

After riding bicycle for many years on State Highway 44 and hitting rumble strips from time to time as they seem to hide in plain sight, the new warning markings that have been added by Caltrans are a most welcome sight.  In the past I have been jolted, had tire damage that ensued in delayed flat tires, some by blow out, and know a friend who crashed on a rumble strip that resulted in an ambulance trip to the ER.

These rumbles do hide in plain sight. Now with the new white markings a cyclist can concentrate more on the other parts of the road feeling assured that the rumbles won’t pop up so unexpectedly. In addition to marking the rumbles Caltrans District 2 is also marking the drainage grates and other utility covers that could also pose a hazard to the unexpected rider.

I find the new markings to be a great addition to making my commute along Hwy 44 a safer and more enjoyable trip. Hopefully these markings will become the norm throughout District 2 and the State of California.  A  big thank you Caltrans District 2 for a job well done.