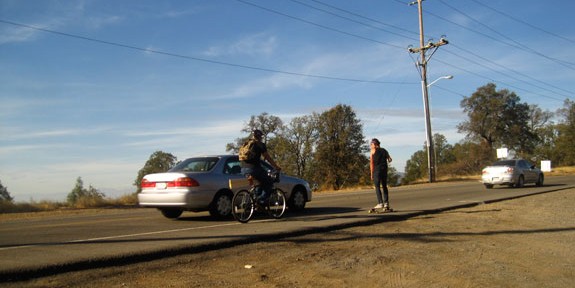 This is a truly impressive level of support for individuals, families and businesses across the state who will benefit from improvements to safe bicycling and walking in neighborhoods, business districts, and between towns and cities.

Great News from State Government:  California went rapidly from deficit to surplus, and then with a reorganization to improve effectiveness we now have a new Transportation Agency with increased funding to active transportation for better health, greater community interaction, stronger businesses, less pollution and more joy.

Walking and bicycling projects will receive a 35 percent boost in state funding through legislation signed by Governor Jerry Brown last week. The bill establishes a new Active Transportation Program funded by $130 million in the first year.

Thank you!   It wouldn’t have happened without actions from people all across the state – writing letters, making phone calls, and ongoing membership and support of their local organizations.  Let’s work together to help our communities ensure increased funding is applied in our region to improve the ability for people to bicycle and walk.

Still, $130 million is about one percent of California’s transportation budget and barely a drop in the bucket compared to the need.

Read more on what this achievement means for the future of California:

People and business in our region would benefit greatly from improvements to street infrastructure for biking and walking.