Taken from remarks made by Mark Lascelles, former President of the Shasta County Economic Development Corporation at the  Reveal the Path event:

So why do you want an old Economic Development Corp. ‘smoke stack advocate’ like me talking about a bicycling lifestyle?  Supposedly to bore you with extensive facts and figures demonstrating the economic output impact of a pro-bicycle community.  I’m going to spare you all that and give you my 10 totally unscientific and unvalidated reasons why being a bicycle lifestyle community is good for the economy…

There you have it.  Ten reasons why bicycling is good for our economy! … what more do we need? 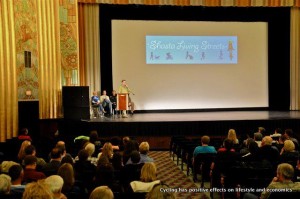